Today has been a full day of painting. I began at seven again working on the view to the right of the house. The light comes on the houses around 7:15 and then it crosses them and leaves them in shadow in about an hour and forty-five minutes! Not a very long time to work. This a dear little scene with the houses half in shadow and light and lots of angles.

At nine I stopped and headed to Lobster Cove. I thought I would show all the sights of this beautiful walk to the cove. As I came down Horn Hill, the electric company was working on the lines. This young lady was confident in her job. 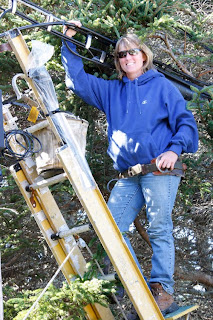 At the Monhegan House the knitters were in full swing. Monhegan is full of artists, knitters, birders, hikers, and day trippers. The knitters have a full agenda. They begin with a superb breakfast at the Monhegan House. This is followed by a hike, knitting, yoga and then lunch. In the afternoon there is more knitting and I think they said more yoga. These women are having fun, laughing, learning and building memories. 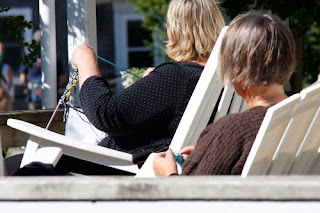 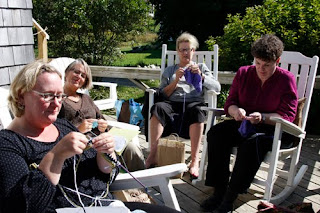 This morning I spotted a truck hauling something in off the ferry. Later I saw that it was a new washing machine left smack in the middle of someone’s doorway on the porch. At the same house, they are getting ready for winter as well. A young man was hauling in about thirty bags of coal into a cellar. Stacked on the porch and lawn were new cords of wood. 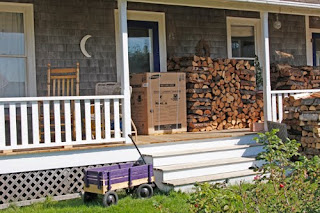 Bikes and Trykes of Monhegan 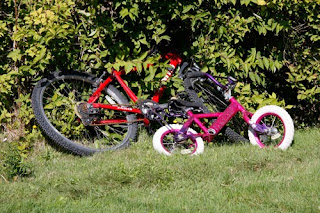 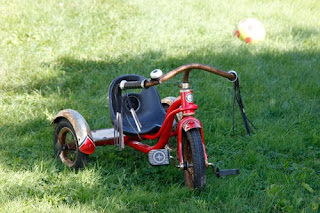 The Trailing Yew is just up on the right which is quite popular and serves home style dinners. 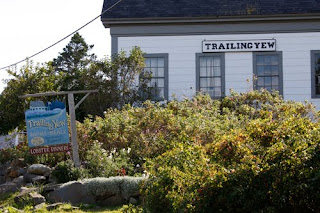 There are a variety of dogs and a met two cute ones Bess and Riley. My camera was on the fritz so my apologies to Bess, but I had to put it in any way. 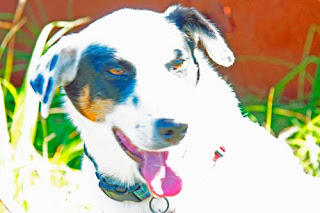 I met Donna Cundy who has two beautiful dogs Schooner and Scout and a cat Lola. They were getting groomed. Schooner has a Facebook page! He is a rough collie with a blue merle coat. I was wild about both of them as I am missing my border collie, Tucker. Scout is just eight months old and has an adorable face as you can see. Donna’s house came down to her from the English artist Samuel Triscott. 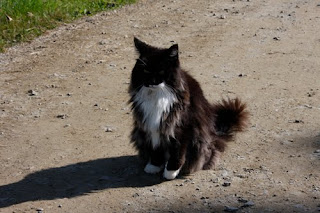 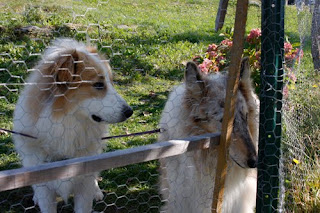 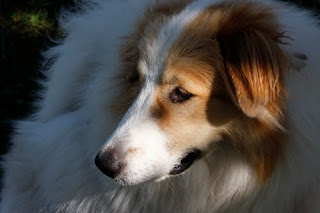 Scout
This boat was keeping watch on the path to Lobster Cove. 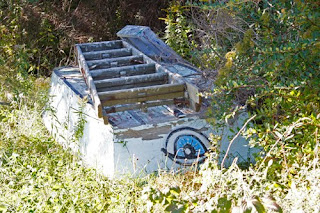 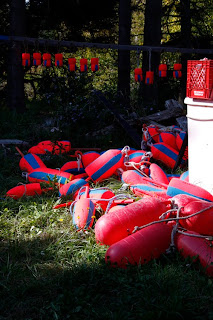 The red house with the picket fence is a favorite of mine complete with an anchor in they yard, roses, and a view of the lighthouse. 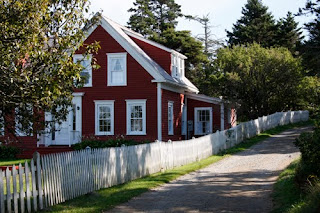 Just as you come in the cove, Jamie Wyeth’s house sits on a high rock bound shore. There were easels set up on the porch and movement in the house. So inspiring for us artists. Lobster Cove was just brimming with excitement.

There was a birder looking at Merlins which are a type of Peregrine Falcon. Knitters were there setting up a photo shot of their newly knitted sweaters. One woman was combing the beach for ocean tumbled sea glass. There were artist’s painting the wreck of the D. T. Sheridan. The Sheridan ran aground in 1948. I decided to paint Alex painting the D. T. Sheridan with other flotsam and jetsam from the Sheridan in the foreground. There were luscious grasses at the shoreline and even a green garter snake. I find it amazing to have such an interesting variety of people, architechture, animals, and boats on such a humble road.

Tonight is pouring on Monhegan and it is a lovely sound in the house.