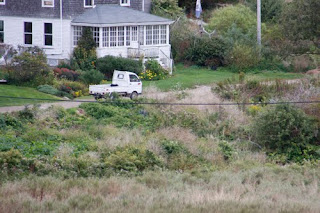 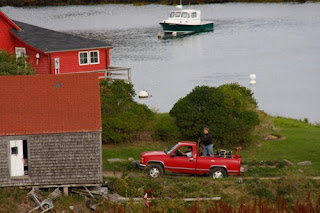 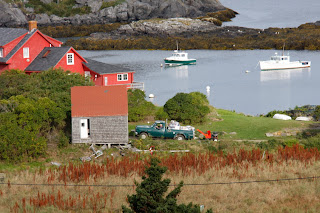 I just love all the trucks of many colors on Monhegan!!!

Sleep would not come easily last night so I noticed a few things. I could see all the stars out of my window not just the normal ones, but so many minor stars that I have not seen. The depth of the blackness here is incredible. I was lucky enough to be invited to this evening under the stars at my friend Becky’s on Mt. Desert. Her house is on an untouched part of the seawall directly on the wall.

An amateur astronomer came to tell us about the night sky. We could see the Milky Way, nebulae, and a ring cluster which is a tiny cluster of moving stars. The telescope let us view a hazy orange ring around Jupiter and four moons on Saturn. The moons kept moving out of our view as we are actually really moving as well on this earth. So amazing and we even saw the Milky Way reflected in the ocean it was so bright that night. This was all a preview to the Night Sky Festival on Acadia, which features lectures, boat rides, and two parties. There is one on Cadillac with the rangers and another one at Seawall all to honor the stars. Peter Lord spoke to us about preserving the night sky. Some communities on Mt. Desert have passed ordinances to reduce the light pollution to save the dark skies of Mt. Desert.

Nan Lincoln of “The Islander” covered the party and I was lucky enough to get some coverage, but not on my shoulders!! Nan wrote, “I met some new people that night. In particular I enjoyed talking to the very cheerful Diana Cobb Ansley, a landscape and portrait artist who is under-standably captivated by the view. Despite the chilly winds Diana was wearing a rather gauzy gown with exposed shoulders and I caught occasional glimpses of her standing on the rocky shore with the wind whipping her dress and Pashmina shawl around and looking very roman- tic in a “French Lieutenant’s Woman”sort of way. ”

So as a cloudbank enveloped the night sky, I realized the glow on frame of my window was actually the lighthouse making its turn around the island. In one quiet moment, I realized modern technology had joined with the lighthouse as my Mac sleepily pulsed three times to the one rotation of the Monhegan lighthouse. Sun just broke momentarily across Monhegan to cheers across the marsh. It was fleeting as thunderclouds rumble off the mainland. Mt. Battie sits low and blue on the horizon. 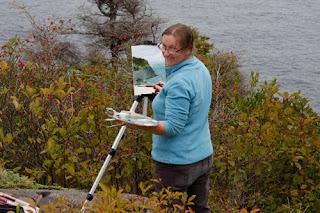 Mary Painting Whitehead
Alex arrived today. I went to the ferry to meet her and we began an afternoon painting of the Island Inn. Tonight will be a gorgeous sunset as there are many unusual formations of clouds as we hear Igor is off shore somewhere? I am the cook tonight continuing our Silver Palette love from last year with Chicken Marbella. I made Steve’s Mexican Chocolate cake with a new twist -organic ginger crystal from Monhegan. So it is officially a chocolate, coffee, cinnamon, ginger cake!! Turned into a glorious day. Mary, Eliza, and Nancy Bea painted away from the house and Mary is about to embark on a sunset painting. Put this place on your bucket list!!!! Sunset is just setting outside my window.